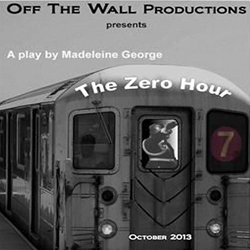 While Off The Wall Theater was busy, Off the Wall Productions has been on hiatus.  We are happy to announce that we will open our season on Oct. 25, 2013

with “The Zero Hour” , a play  written by Madeleine George  (Precious Little, City Theatre 2011) as a member of  13P Playwrights Collective.
For more information about 13P follow link –http://www.13p.org/

The play is (or could be perceived) as controversial,  but in the end it is “just” a love story.  Lesbian relationships and the Holocaust are at the center of

actors, Erika Cuenca and Daina Michelle Griffith, who beautifully handle both the humor and drama of the piece. They do it all,  lovers, mothers and WW II Nazi’s on the NYC Subway.
Robyne Parrish (currently Artistic Director at the Gilbert Theater, Fayetteville, NC.), in her sixth directing assignment for Off The Wall, is following the Playwright’s bold and offbeat
approach that makes such scenarios not only plausible but emotionally resonant.

Since “The Zero Hours” 13P premiere in NYC in 2010 no other theater companies have picked it up,  ours will  be the second full production.

Rebecca (Erika Cuenca) writes for an academic publishing company, and lives in a Queens walkup with her girlfriend O (Daina Michelle Griffith), who is unemployed and has no interest in changing that situation,
which is only one of the sources of tension between the two women: Rebecca remains closeted both at work and to her mother, and reveals to her therapist that she’s not even sure if she’s a lesbian.

Rebecca’s also writing a text book for seventh graders about the Holocaust.  But her inner struggle over how honest her text should or should not be – how graphic is too graphic?
Should she include homosexuals among the persecuted? Will any school system in the Bible Belt buy this book? – causes her to meet up with Nazis on the 7 train during her daily commute.