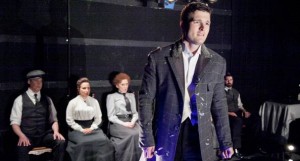 A new production, based on Willa Cather’s 1905 story of a Pittsburgh boy

Pittsburgh, PA… Pittsburgh Opera continues its 75th anniversary season with Gregory Spears’s PAUL’S CASE, a new opera with a Pittsburgh connection, starring the Resident Artists of Pittsburgh Opera’s acclaimed singer training program. The second work in Pittsburgh Opera’s American Opera Series,* PAUL’S CASE is on stage at Pittsburgh Opera Headquarters February 22 – March 2, as the company’s 2013-14 Second Stage Project. Based on Willa Cather’s short story of the same name, PAUL’S CASE is the story of a high school “dandy” who yearns for a more exciting life away from gritty, industrial Pittsburgh. Paul’s fantasies have been fed by the glamorous musical performances he witnesses as an usher at Carnegie Music Hall. When Paul is suspended from school, he steals money and flees to New York City. After a stay in the Waldorf-Astoria, a shopping spree, and a fling with a Yale freshman, Paul’s escape is discovered by his father and by the media. Paul’s ambitions come crashing down in a wrenching finale.

Composer Gregory Spears is expected to participate in Opera Up Close February 16 [see “related events”] and will attend the opening night performance.

Facts about the opera and the composer

PAUL’s CASE premiered in April 2013 at Urban Arias in Washington, DC, and was developed by American Opera Projects. The work blends minimalist and Baroque stylings to create a unique new chamber opera sound.

PAUL’S CASE received excellent reviews both from The Washington Post at its world premiere in April 2013, and from the New York Times, from the Prototype Festival in January 2014.

Gregory Spears and librettist Kathryn Walat took a fresh look at Willa Cather’s 1905 story, and drew timeless parallels from Paul’s character when they created the opera. To quote Gregory Spears, “he [Paul] seems to be saying ‘yes’ and ‘no’ to life throughout this piece. He’s so full of life, and a fascinating character, yet at the same time, he ultimately says ‘no’…. There’s something about that paradoxical feel of him…so fascinated by the world, and at the same time, feeling as if he needs to reject it – this powers the enigma that’s at the core of the Cather story.” See more remarks from Gregory Spears and Kathryn Walat here.

The story, in brief

Pittsburgh, 1906. Paul appeals his suspension in front of three teachers and the high school principal. The teachers are infuriated by his dandyish behavior and appearance, epitomized by the red carnation he wears. Paul is dismissed; he bows gracefully and exits.

Later that evening, Paul’s father is calculating figures at his desk, while Paul changes into a uniform – he works as an usher at Carnegie Music Hall. The father decries his son’s disdain for middle-class values, while Paul tells of his love for all things exotic and theatrical. Paul’s English teacher arrives unexpectedly at the Music Hall with two tickets given to her by a steel magnate. Waiting for the show to begin, the English teacher recounts a life full of disappointments. Two opera singers take the stage; Paul and the English teacher are enchanted. Paul’s father, still simmering at home, warns that this will be Paul’s last night working at the theater, on account of his recent suspension from school.

Paul’s father sends him to work as a cash-boy clerk. Distraught, Paul describes his contempt for the banalities of workaday life in Pittsburgh. He steals the firm’s weekend deposit and catches the next train to New York City.

Three hotel maids prepare a sumptuous suite at New York’s Waldorf Astoria. Paul enters triumphantly, and smugly catalogs his purchases from an afternoon shopping spree. At dinner in the Waldorf Astoria’s dining room, he encounters a Yale freshman in town for a weekend visit, and the two join up for a drunken night on the town.

Waking with a hangover the next day, Paul asks for the Pittsburgh newspapers, in which the maids read of his theft. Paul discovers that he has been spotted at a New York hotel and that his father is coming to take him back home. He then unwraps his final purchase, a shiny revolver, and contemplates his final actions. He puts the revolver away, and heads for the Newark train yard.

Arriving on an embankment overlooking railroad tracks, Paul buries a red carnation in the snow. He falls asleep and is later awakened by a distant train whistle. As the locomotive approaches, he leaps in front of it. Paul’s teachers and father lament Paul’s death as he dissolves into the landscape.

Tickets to PAUL’S CASE are $40, with all performances at Pittsburgh Opera Headquarters, 2425 Liberty Avenue, in the Strip District. For additional information, videos, photos, musical samples, cast biographies, and the full story of PAUL’S CASE, visit www.pittsburghopera.org. To purchase tickets, call 412-456-6666 or visit www.pittsburghopera.org.

These casual, one-hour concerts feature our Resident Artists in the George R. White Opera Studio at Pittsburgh Opera Headquarters. Guests can meet the performers after the concert. Free and open to the public; no RSVP required. Doors open at 11:30 a.m. For more information, call (412) 281-0912 or visit www.pittsburghopera.org

New Kensington, Resident Artist stage director George Cederquist; and Pittsburgh Opera Director of Artistic Operations Bill Powers. Admission is $5; the event is free to members of FRIENDS of Pittsburgh Opera and donors at $50 and above. For more information, visit www.pittsburghopera.org.

Hosted by WQED’s Anna Singer, and broadcast over the airwaves as well as the WQED website, the PAUL’S CASE preview gives listeners an engaging introduction to the singers, music and story of the opera. For more information, visit www.pittsburghopera.org

Ticketholders with visual impairments are invited to use Pittsburgh Opera’s Audio Description service at our Tuesday performances. Trained volunteers describe the scenery, costumes, and stage action via headphones. Those wishing to use Audio Description should reserve seats to the Tuesday, February 25 performance: call Randy Adams at 412-281-0912, ext. 213 or groups@pittsburghopera.org. Braille and large-print opera programs are also available.

Meet the Artists of PAUL’S CASE

Ticketholders for the Tuesday, February 25 performance of PAUL’S CASE are invited to remain in the George White Studio immediately following the performance for interviews with General Director Christopher Hahn and the stars of the opera. This event is free to all Tuesday performance ticketholders.

Pittsburgh Opera celebrates its 75th anniversary in 2013-14 with OPERA FOR A NEW AGE, a mix of long-beloved operas and new favorites. Established by five intrepid women in 1939, Pittsburgh Opera is viewed as one of the most vibrant opera organizations in the U.S., with a rich artistic tradition, outstanding educational programs, an acclaimed artist training program, and a progressive outlook toward the future. Its green initiative culminated in LEED® Silver certification for its Strip District headquarters, and its capacity as a true community partner has increased significantly under General Director Christopher Hahn’s leadership. Tickets for the 2013-2014 season start at just $12.