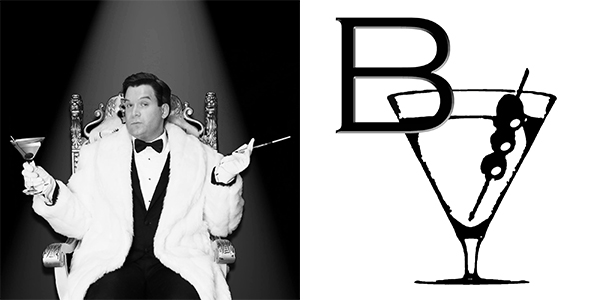 We are all of us living in a bubble.  That bubble may be our fears, our insecurities, or other such chains of our own making.  This is the theme that resounds from the fast-paced, hilarious misadventure that is Bubble Boy The Musical.

The book is by Cinco Paul and Ken Daurio, with Paul also having composed the music and lyrics.  When taking in the show’s break-neck, cartoonish pace, it’s not surprising to learn that this very team is responsible for the screenplays of the Despicable Me animated film trilogy.  After about 10 minutes in, you’re willing to forgive their invention of the yellow, goggle-faced Minions of the aforementioned film franchise and the base brand of comedy (term applied loosely) that they project, as Bubble Boy’s dialogue is razor sharp and the lyrics incredibly witty.

Bubble Boy’s story, as you may guess, focuses on a boy in a “bubble:”  Jimmy Livingston (Nathaniel Yost), who due to a hyper un-immune system, has been sealed within a sterile environment since birth, watching the world pass by from his window, vigorously shielded by his overprotective mother, Mrs. Livingston (Missy Moreno).  To pursue love interest Chloe (Alex Manalo), Jimmy sets out on a cross-country journey (in a mobile bubble unit) encountering a cast colorful characters along the way.

In the telling of the tale, Mr. Paul and Mr. Daurio send up numerous musical genres from rock to gospel, while presenting a fully realized musical, love story, and “road story,” all within a hour and a half, no intermission, block of stage time.  Not only are the results hilarious, but also a lesson in good, concise story telling.  I described it to a friend afterward as “Around the World in 80 Minutes.”  Even the most feeble of modern attention spans will be riveted the relentless action.

It’s difficult not to laugh through the deftly scripted scenarios and jokes.  However, the cast assembled by director Don DiGiulio takes the material to the very pinnacle of comedy, leaving no stone unturned in the pursuit of an inflection or sight gag that could, even potentially, elicit laughter.  Although the entirety of the cast fails to match each other in vocal prowess, they are firmly united in their comedic delivery.  Not a single member of the ensemble (Noah Welter, Jerome Fitzgerald, Laura I. Young, H. Davis Weaver, Ricardo Vila-Roger, Emily Welsh, Elise Brado, Rachel Pfenningwerth, and Maher S. Hoque – all of whom are worth mentioning) fades into the background, as each steals the show at some point or another, taking on the role of a vivid friend or foe that Jimmy interacts with on his journey.  When consolidated as an ensemble, they’re working overtime, interjecting enough micro subplots and visual jokes to make the show worth seeing a second time in order to catch it all.

Mr. Yost never tarries nor falters in his marathon performance as the show’s titular protagonist.  He carries the show exceptionally, providing Jimmy a sympathetic believability of a boy who’s never been out of doors.  His earnestness is well matched by Ms. Manalo’s Chole, whose performance remains grounded amid the chaos of on-and-off romance.  Ms. Moreno’s broad portrayal of Mrs. Livingston is compelling in its wacky and original humor, bringing together the attributes of “lovable” and “psychotic” in a manner rarely seen.  Her counterpart, Mr. Livingston (Brad Stephenson), is a man of few words, though when he summons them, their skillful and measured delivery brings a balance and welcome tenderness to the madcap proceedings.

Indeed, many of the acting choices are over the top and many of the scene transitions are improbable, but in the light of the absurd comedy, it’s immediately forgivable.  Mr. DiGiulio and company have established an environment where anything can, and does, happen – and it all works.

What is perhaps most remarkable about Arcade’s Bubble Boy is DiGiulio’s incredibly crisp and clean direction of a brisk, robust musical, consisting of a 13-person cast, plus set and choreography, on a stage that appears to be 20 feet wide at most.  It comes off very precisely, never feeling crowded, and can easily hold a candle to the lofty expectations of a blockbuster musical performing in a 1,000-seat-plus theater.  It’s like quantum mechanics: big energy, little space – and considering the current economic climate of the performing arts, I predict we’ll be seeing more and more shows like this one. 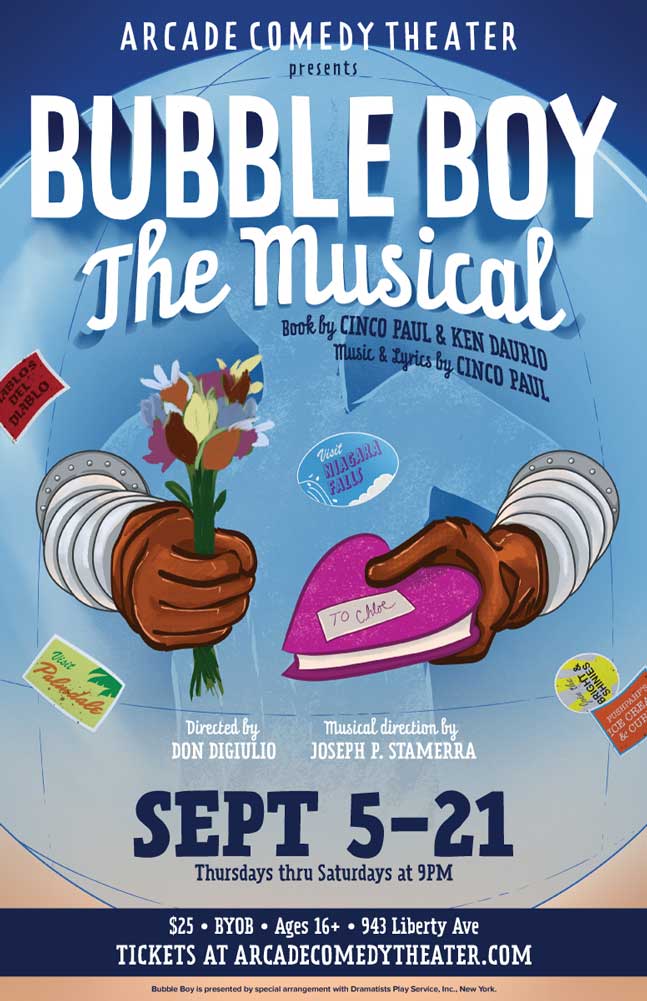