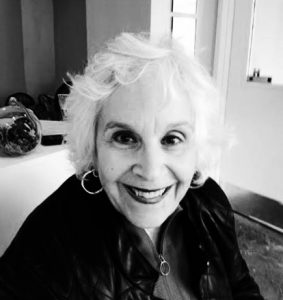 Pretty, perky, pleasantly plump. Tracy Turnblad (Caroline Connell) is a teenager in 1962 Baltimore. Her hair reflects the times – with so much applied hairspray that even a 50 mile-an-hour wind does not move it. She loves to dance and rushes home from high school every day to watch the dancers on the local “Corny Collins Show,” the show within the show in “Hairspray.”

When she discovers that one of the permanent dancers on the show is leaving, Tracy decides to audition for a part. Her mother Edna Turnblad (Jason Newsom) is an extremely large woman – housebound due to her weight. She won’t allow Tracy to audition because she fears that her daughter will be maligned because she is heavy, too.

Not as diligent in school as she is at dancing, Tracy often finds herself in detention. She meets Seaweed Stubbs (Camara Rhodes) and a group of teens who show her different dance moves. Tracy’s father Wilbur Turnblad (Matthew J. Rush) encourages her to try out for the show. She encounters some push back from the show’s producer, Velma Von Tussle (Ashley Harmon) who is appalled that someone who is heavy would have the audacity to audition. Her daughter Amber Von Tussle (Felice Rose), blonde, thin and talentless is a reflection of her mother.

Tracy does audition, secures a position as the newest member of the show and becomes a local celebrity.

Note: The new friends that helped Tracy survive auditions and move into the spotlight are African Americans and in 1962 they weren’t permitted to become a daily part of “The Corny Collins Show.” They were only allowed to appear on the show once a month.

Tracy decides that that should change.

Underlying the fun and comedy in this musical are two inequities that still exist today but hopefully they’ve become less prevalent: body shaming and segregation. Connell owns the stage from the play’s opening with “Good Morning Baltimore” until the final curtain, singing, dancing and prancing brilliantly throughout.

Newsom is a large man which makes his role even more hilarious as Edna. Light on his feet, he delivers snide remarks and side glances that would make Bea Arthur proud!

Great singing and dancing by Rhodes in “Run and Tell That.”

Johnson shines in her beautiful and moving rendition of “I Know Where I’ve Been.”

Consistently in character as the pompous producer, Harmon lets it rip in her rendition of “Velma’s Revenge.”

The entire cast of this delightful show was wonderful. Not one weak link in the chain.

Kudos to Music Director Meagan Bruno and the musical ensemble. The show was well directed by Art DeConciliis.

“Hairspray” is a production of Stage 62 and is presented at Andrew Carnegie Free Library & Concert Hall, 300 Beechwood Avenue, Carnegie, PA and runs from November 14 – 24, 2019. For more information, click here.

(Tracy) Caroline Connell was electric!
You said it well, “…Connell owned the stage”. Her singing, dancing and acting were fabulous.