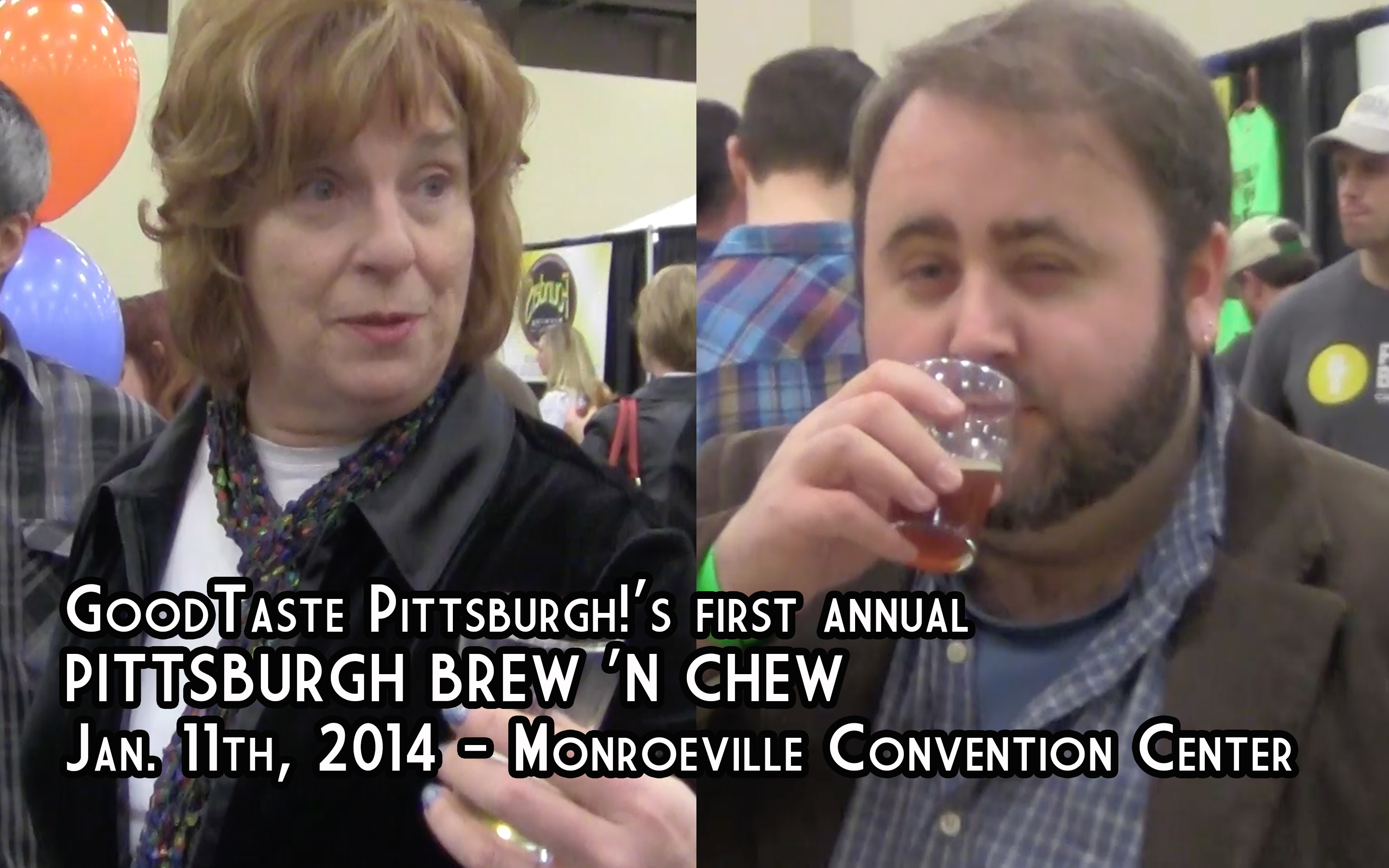 No tap was left unturned when ‘Burgh Vivant loosed contributors Lonnie Jantsch and Andy Coleman on the Monroeville Convention Center January 11th for the first annual Pittsburgh Brew ‘N Chew event presented by GoodTaste! Pittsburgh.  The debonair duo sampled beers from numerous breweries, both local and national in this tour de force of fun and flavor.  Many of Pittsburgh’s favorite neighborhood bars and food-crafters were on hand with generous tastings of everything from pulled pork sliders to gelato infused with…beer??  Watch the laughter unfold while the beer flows as Lonnie and Andy make new friends, challenge each other to a game of portable water polo, and nearly drive off with a brand new car!  Who held their beer the best throughout the day?  You be the judge! END_OF_DOCUMENT_TOKEN_TO_BE_REPLACED PITTSBURGH, Pa., November 14, 2013 – GoodTaste! Pittsburgh is excited to announce that legendary Brooklyn Brewery brewmaster, Garrett Oliver will be headlining the first-ever Pittsburgh Brew ‘N Chew on January 11, 2014, at the Monroeville Convention Center. One of the foremost authorities in the world on the subject of beer, Oliver will bring his more than 20 years of experience to the event to discuss how to create the perfect pair when matching food with beer.

“When it comes to brewing, I’m not sure it gets any bigger than Garrett Oliver,” said Dee Weinberg, president, GoodTaste! Pittsburgh. “Not only is he one of the most recognizable figures in the industry, he is also one of the best when it comes to pairing beer with food. It’s simply a match made in heaven for the Brew ‘N Chew and we couldn’t be more excited to have him at this year’s event.”

Oliver is entering his 20th year as brewmaster at the Brooklyn Brewery. Since joining the Brewery in 1994, he’s been creating unique and delicious brews and hauling in awards both domestically and abroad. He is widely known for his flavorful interpretations of traditional brewing styles and as an avid and entertaining lecturer and writer on the subject of beer, penning “The Brewmaster’s Table” and serving as Editor-in-Chief of “The Oxford Companion To Beer”.

But Oliver is more than just the mastermind behind the bottle; he’s also an expert when it comes to pairing beer with food. In fact, he’s hosted more than 800 beer tastings, dinners and cooking demonstrations in fourteen countries and is internationally recognized as an expert on traditional beer styles and their affinity with good food. To add to his impressive resume, he is also a frequent contributor to beer and food-related periodicals.

To learn more about the inaugural Brew ‘N Chew event, purchase tickets or inquire about participating as a sponsor or vendor, please visit www.goodtastepittsburgh.com.

GoodTaste! Pittsburgh is Western Pennsylvania’s largest food and cooking extravaganza, dishing up events that showcase food and spirits as an entertaining, exciting and engaging experience. Our plate is full with large one-day shows that feature national and local chefs; corporate events for clients and employees; food events and shows with stellar regional partners like the Heinz History Center; and workshops for foodies.

PITTSBURGH, Pa. – There’s a new beer festival on tap for the greater Pittsburgh region, and this one’s got bite. As beerfest buzz continues to bubble across our great city, GoodTaste! Pittsburgh is giving its famed food-show reputation a new twist with the introduction of its first-ever Pittsburgh Brew ‘N Chew, sponsored in part by the Monroeville Convention Center.

The inaugural event, taking place January 11, 2014, at the Monroeville Convention Center, will offer attendees a selection of libations from brewers both big and small, alongside a wide range of food pairings from several local eateries. Not your ordinary beerfest, the Pittsburgh Brew ‘N Chew will also give attendees a chance to work up an appetite or enjoy the sweet taste of victory at a number of interactive stations. Whether it’s darts, pool, bowling or simply taking in the sights, sounds and smells while lounging at golf’s 19th hole, attendees will have the opportunity to eat, drink and be merry throughout the day.

“The Pittsburgh Brew ‘N Chew is a new take on the modern beerfest,” said event organizer and President of GoodTaste! Pittsburgh, Dee Weinberg. “We’re taking an interactive approach by offering more than just beer and food. Visitors will be able to take part in games, learn tailgating tips and tricks and listen to live music from popular Pittsburgh bands. And, with a portion of the proceeds going to the Greater Pittsburgh Community Food Bank and Give Kids the World, visitors can feel good knowing that their participation is helping make a difference in the community.”

To learn more about the inaugural Brew ‘N Chew event, purchase tickets or find out how you can become a sponsor, please visit www.goodtastepittsburgh.com.

GoodTaste! Pittsburgh is Western Pennsylvania’s largest food and cooking extravaganza, dishing up events that showcase food and spirits as an entertaining, exciting and engaging experience. Our plate is full with large one-day shows that feature national and local chefs; corporate events for clients and employees; food events and shows with stellar regional partners like the Heinz History Center; and workshops for foodies. 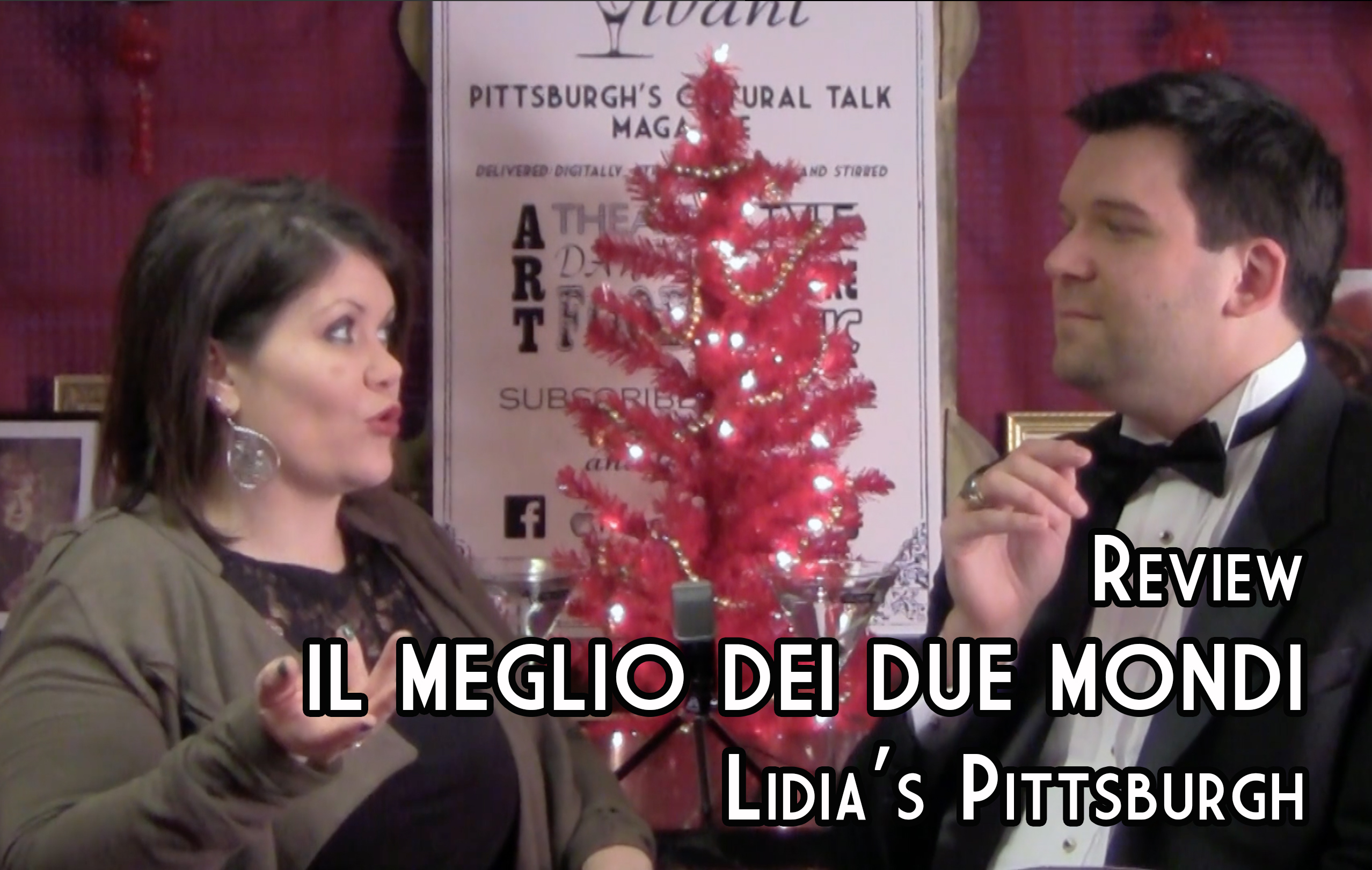 ‘Burgh Vivant revisits LIDIA’S PITTSBURGH for Il Meglio dei due Mondi – “The Best of Both Worlds” – a 4-course beer pairing dinner arranged by General Manager Adam Greiner and Executive Chef Jeremy Voytish.  The flavors were bursting – and so were the comments from guest contributor, comedian Missy Moreno!  Get the dish on the dishes, and listen to “The Full Martini” – the complete unedited interview in audio podcast, for more delicious details and merry musings from Missy and Brian Edward. END_OF_DOCUMENT_TOKEN_TO_BE_REPLACED

Pittsburgh, Pa.—Phipps Conservatory and Botanical Gardens is pleased to welcome Amy Tyner as Café Phipps’ new executive chef. Nestled inside the public garden’s LEED® Silver Welcome Center, this Green Restaurant Certified® and Hobart Center for Foodservice Sustainability award-winning establishment is committed to serving fresh, healthy food that is good for both people and the planet.

Having more than 15 years of professional cooking and management experience, Tyner brings to Café Phipps a wealth of qualifications. A chef since the age of 17, she has cooked for presidents and celebrities at top-ranked hotels and restaurants in Detroit, Columbus and Pittsburgh, working most recently as executive chef and director of food and beverage for Four Points by Sheraton Pittsburgh North. She is also a Michigan Restaurant Association silver medalist and has served as a board member for Hocking College, The Pittsburgh Culinary Institute and the Columbus chapter of The American Culinary Federation.

“Amy is a passionate advocate for healthy eating and sustainable food practices, which makes her a great fit for Café Phipps,” says Phipps Executive Director Richard V. Piacentini, “With our commitment to responsibly sourcing ingredients and serving nutritious meals, we are always looking for ways to raise the bar. We look forward to working with Amy as we continue to innovate and reach our goals.”

Drawing on the best flavors of the season, Tyner has just launched an inspired winter menu with highlights like the Smoked Salmon Salad made with an artisan greens blend, marble rye bagel chips, goat cheese and caper vinaigrette; and a Grilled Halloumi Plate with pickled vegetables, beluga lentils, scallions, lime and currants. An equally delicious and wholesome children’s menu features such instant favorites as Almond Butter and Berry Sandwiches and gluten-free Quinoa Pasta with Chicken Meatballs.

About Phipps: Founded in 1893, Phipps Conservatory and Botanical Gardens in Pittsburgh, Pa. is a green leader among public gardens with a mission to inspire and educate all with the beauty and importance of plants; to advance sustainability and promote human and environmental well-being through action and research; and to celebrate its historic glasshouse. Learn more: phipps.conservatory.org. 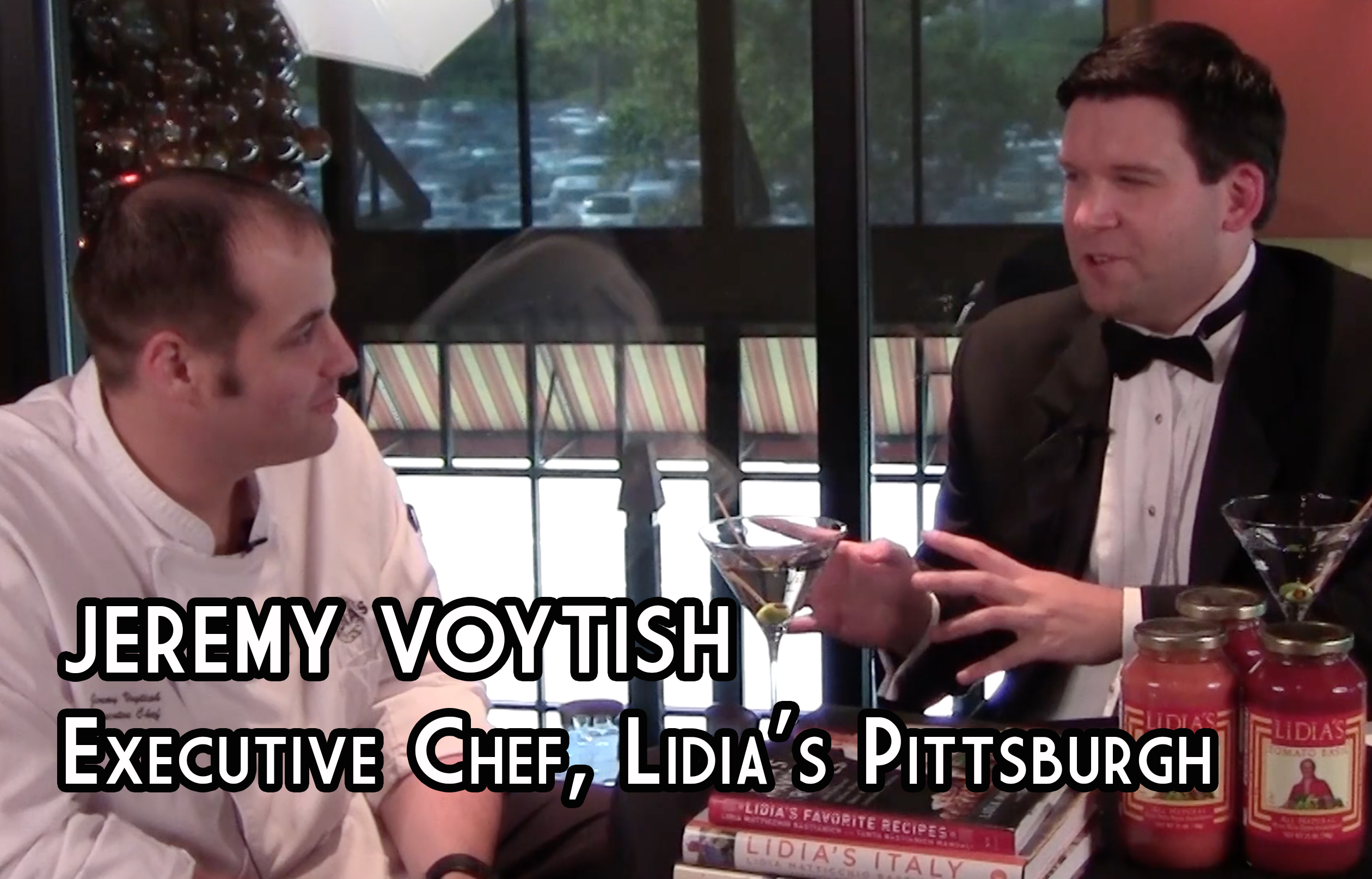 Our delicious visit to LIDIA’S PITTSBURGH continues as host Brian Edward has a few words (over vodka SAUCE for a change) with Executive Chef, Jeremy Voytish.  Get the inside “dish” on what makes a great Italian meal, the hardest part about serving Presidents, and what its like to work with one of America’s most beloved TV chefs.  And be sure to catch our chat with Lidia Bastianich, as she discusses her latest cookbook LIDIA’S COMMONSENSE ITALIAN COOKING, Pittsburgh’s unique taste, and cooking for the Pope!

END_OF_DOCUMENT_TOKEN_TO_BE_REPLACED 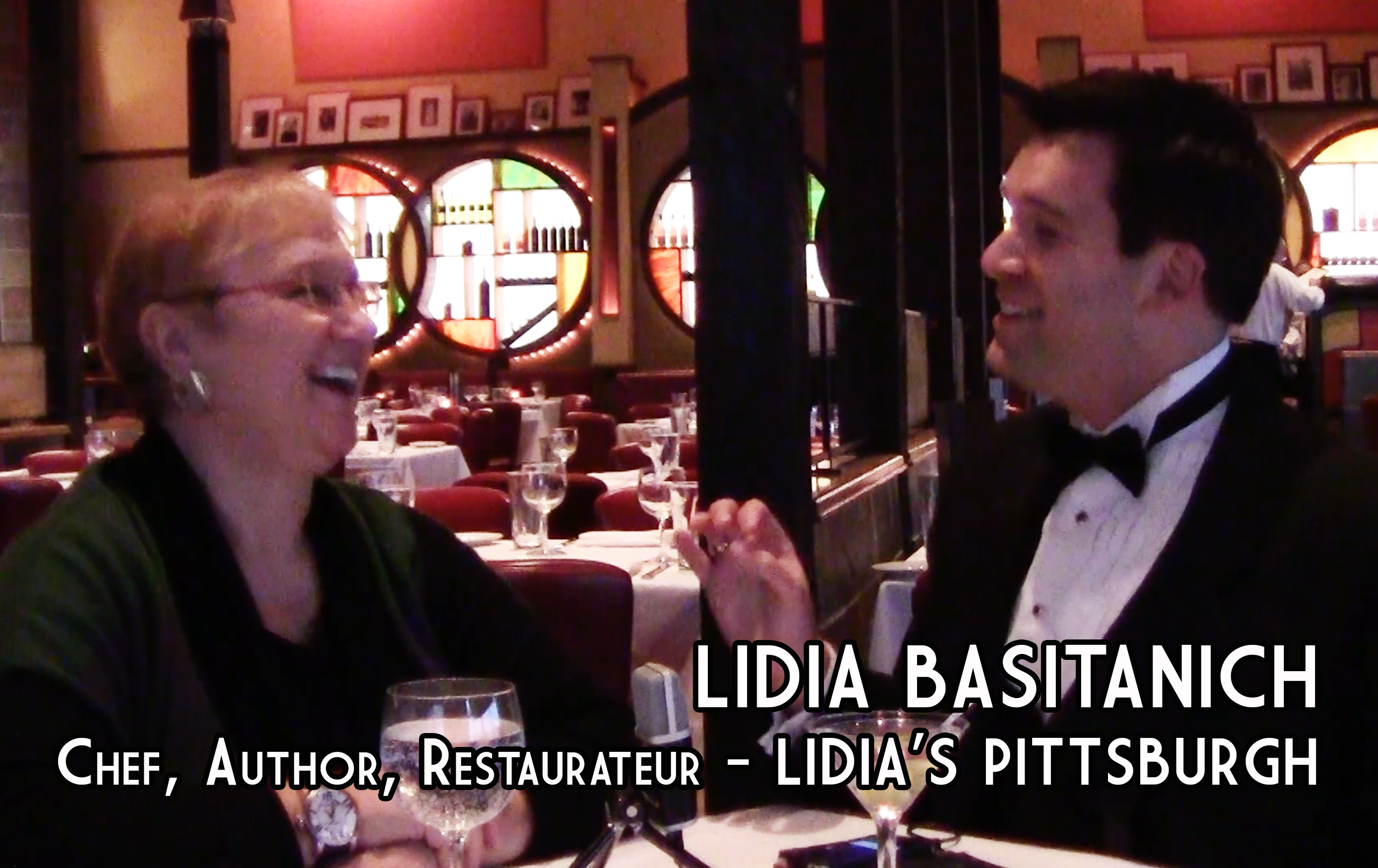 What do you cook for the Pope?  One of America’s most beloved chefs, Lidia Bastianich has the answer!  She is the host of the Emmy-nominated television series, LIDIA’S ITALY, a best-selling cookbook author, and the restauranteur behind LIDIA’S PITTSBURGH.  Tonight on ‘Burgh Vivant, the ever delightful Lidia discusses her latest cookbook LIDIA’S COMMONSENSE ITALIAN COOKING, Pittsburgh’s unique appreciation for good food, and cutting cake with His Holiness Pope Benedict XVI.  For more wisdom from Lidia’s kitchen, listen to “The Full Martini” – the complete unedited interview in podcast, on iTunes or www.burghvivant.org END_OF_DOCUMENT_TOKEN_TO_BE_REPLACED