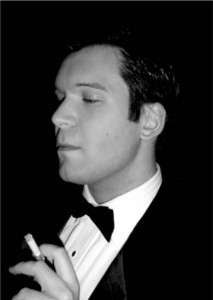 “Express Burlesque” presented by RED City Live Entertainment opens its holiday show at Off The Wall Theatre this weekend, and its the perfect opportunity for you to check and balance any preconceived notion you may have of this delightful art form.

You hear the word “burlesque.”  What’s the first thing that comes to mind?  If you said “pasties and a g-string, beer and a shot, Portland through a shotglass and a buffalo squeeze,” (or any derivative thereof), congrats – you’re in good company with most Americans.  But the art of Burlesque is more than skin deep.

burlesque:  noun.  a literary or dramatic work that seeks to ridicule by means of grotesque exaggeration or comic imitation.

The word itself actually comes from the Italian “burla,” which is a joke or a mockery.

Burlesque is not pornographic.  So – how do we get from enjoying a comic imitation to the notion that we might not want to be seen exiting the building?  First, let’s accept that, as in the maligning of most things inherently enjoyable by human nature, religion is the number one party pooper.  If you liked it, you should be ashamed of yourself.  This considered, we can proceed.  “Burlesque,” as it was bandied about in the Victorian era, was a general term referring to theatre.  And what is theater but a portrayal, often sensational and exaggerated, of life?  The term even found itself applied to music, in compositions that perhaps had a self-aware sense of humor about themselves.

America has a knack for Americanizing things, and burlesque was spared no treatment.  As vaudeville theatre became prevalent throughout the late 1800’s and early 1900’s, featuring comedy acts, clowns, jugglers, singers, oddities, etc., the term “burlesque” was applied, differentiating it from “legitimate” theatre such as Shakespeare – which, ironically, was itself considered burlesque in its time and country of origin.  There was nothing dirty or shameful about it, and nobody was getting naked.  But at some point along the way, burlesque picked up the strip-tease.  This is a term that gets maligned as well.  A true burlesque striptease is a work of art.  It may actually be the closest tidbit of Americana to the highly respected Geisha culture of Japan.  Its all about the build-up, never the reveal.  The essence of the art is in what you don’t see rather than what you do see.  It is a dance – it is a performance.  Consider the alternative.  In my mind, the direct foil is Zorro, the Baltimore stripper often and fondly recalled by John Waters in his stage show “This Filthy World,” who “just walked out nude,” leaving nothing to the imagination, nor to artistic interpretation.  Bear in mind, burlesque shows were variety shows, and this dance was a welcome shift from the tap-dancing bowling pin juggler who had just taken his bow.  Don’t want to feel guilty about enjoying a true burlesque strip-tease?  Think of it as a “costume ballet.”  And this ballet fit within the parameters of burlesque, because it was entertainment.  An exaggeration, perhaps, of femininity itself.

I had to face the disconnect head on when in 2005, I began touring a musical comedy cabaret that I had written and produced entitled “Amish Burlesque.”  Insert chuckle.  Because the name itself is the very essence of burlesque.  A parody, a mockery.  The comedic formula is perfectly summed up in the opening number, during which the lead female (Goody Plenty), in black dress and white bonnet, enters to the tune of David Rose’s “The Stripper,” expressionless, takes off her sock, twirls it in the air, and shows off a bare ankle.  The show plays with your expectations by taking something that would typically not be thought of as sexy and funny, and treating it as if it were sexy and funny.  Really, the joke is on you.  Still, there were a few people who thought that, given the title, they’d see Amish ladies flashing their pumpkins.  Hey – if they bought a ticket, I was thrilled.  But the misconception was present.  In some ways, we used it to our advantage in promoting the show: “Girls Gone Mild!,” “The Cleanest Dirty Show in Town!,” etc.  The fact that the preconceived notion of burlesque could be comedically manipulated in such a manner speaks to how we’ve mislabeled this art form.

Is it cheeky?  Absolutely.  Is it risque?  Sometimes.  But its 2013.  A billowing dress and parasol is not going to go over the same way it did in 1902.  RED City gets this.  Express Burlesque combines an old burlesque feel with a provocative, yet classy, modern twist.  So enjoy!  And be thrilled that “burlesque is back!”  (That sounds nice to say with the alliteration and all, but truly, burlesque never went away).  This is a great chance to let your hair down and be entertained, and if you’ve never been to Off the Wall Theatre in Carnegie, what better occasion could there be?  You’ll find that the space is perfectly suited for a dance review of this kind, as well as the top-notch professional theatre that Off the Wall is turning out in its annual season.  So have a look.  The show runs through November 30th, and in fact, this may be the perfect night out for the crazy nut-ball family you’ll be spending Thanksgiving with.  Imagine the conversations you’ll have over leftover turkey.  “Leg” puns are already springing to mind.  Get your tickets here:  http://www.showclix.com/event/3783798   You’ll find that burlesque is a great deal more than just “showin’ your shimmy.”